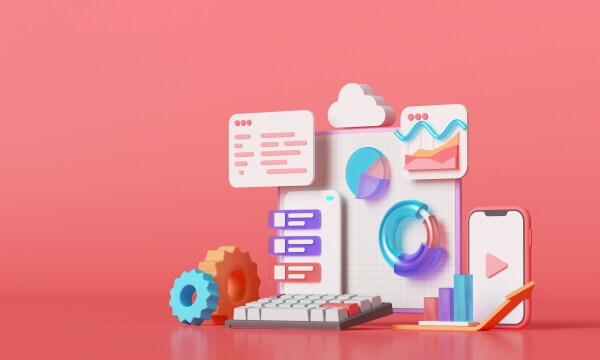 What’s the first thing that people notice after they click on your website? It’s not the fact that it loads well, nor its rank in Google Search. It’s how it looks. The eye candy. The way the text looks and the way everything is placed.

All of these things combined form what people in the design domain call a user interface, or UI for short. And no, you don’t necessarily need artistic skills, nor do you need to go to art school to create a great user interface. With that said, here are some tips that might come in handy.

The first non-obvious rule of creating a great user interface is, ironically, how to use light. In photography, it’s pretty obvious even if you don’t study the domain for years on end. However, when creating logos and basic shapes from scratch, the one thing beginners often ignore are the shadows.

As a general rule, light comes from the sky, so your shadows should imitate that exact feeling. You wouldn’t think of people’s lower eyelids as being particularly shaded, but shine some light on those suckers and all of a sudden, it’s demon girl at your front door.

The best way to focus on the important elements of your page is to start designing with mere shapes and negative colors. As such, we recommend using grayscale colors when designing the basic website UI or even something more complex like a gaming interface.

This way, you’ll force yourself to focus on spacing and laying out elements instead of superficial stuff. Having such a constraint is great because it allows you to prioritize elements and their order rather than “flashy” stuff that only looks good on the best high-end monitor on the market.

Speaking of spacing, we can’t stress the importance of breathing room enough. Create a Word document from scratch and start writing one or two paragraphs with the program’s default settings. It looks horrendous.

Now open a modern phone or desktop app, such as Spotify for example. You’ll notice how well-spaced each line of text is within the app. Whether you’re browsing through a playlist, reading an artist’s bio, or sifting through podcasts, everything has enough breathing room to look pleasant and make you want come back for more.

Learn How to Overlay Text on Pictures

One of the major obstacles that beginner designers face is the art of overlaying text on pictures. It’s not as obvious as it might be. Some people often put white text over overly white images. The thing is, depending on your own brightness settings, the text might still look readable. But on another device, it might be absolutely ridiculous.

Obviously, there are plenty more rules to take into consideration when designing a UI, regardless of its purpose.

However, with these basic rules in mind, you’ll be able to craft something from scratch and make it appealing, easy to read, and understand to a large audience.

What Is an Active USB Cable?

3 Things To Evaluate Before Starting Your Own Business